FOREVER YOUNG: THE YOUNGEST AS A WORLD'S FAIR PRESIDENT

The author's autobiographical adventure chronicles his odyssey through a series of captivating events which occurred on international, national, state, and local levels, all while he held the distinction as the "youngest ever."

He was the youngest: newspaper editor, governor's cabinet member, university vice president, and, most significantly, president of an international World's Fair.

And, while none of the designations were intentionally sought, the author's recollection of the highlights of those moments showcases one man's unique journey across the political landscape of modern America.

Still working on determining what I would like to be when I finally grow up.....but, in the interim, the occurrence of a forthcoming significant anniversary prompted me to complete a book that I had been mulling over and thinking about for quite some time. Writing has long comprised a major portion of my career....it's what I have always done and am still doing in order to assist my clients, champion redeeming causes and communicate my humble opinions through dozens of op-ed columns published in multiple newspapers. And, now, I am doing it to relate some of my personal stories.The 40th anniversary of the highly successful, but occasionally maligned, 1982 World's Fair in Knoxville, where I served as president and CEO inspired me to finally--borrowing an allusion here from my favorite hobby--select the grapes, create the blend, age the wine, bottle it, and proceed with distribution. At the time of the World's Fair, I was the youngest Fair executive on record.I was born in Ohio, raised in Tennessee, and was privileged to invoke my U.S. Air Force-earned G.I. bill in order to obtain a journalism degree from the University of Tennessee-Knoxville. My life path has been circuitous and serendipitous, filled with fascinating experiences, captivating interactions, a few unforgettable instances and several keep-your-eyes-wide-open moments. While accompanying me on this readable journey, you'll discover that the youngest often occurs by happenstance and without intent. Regardless, holding the honor of being the youngest-ever Fair president, and retaining that designation 40 years later, is, I believe, fairly notable.Two enduring loves in my life are history and wine. Here's why: No matter how much you learn, there's always more and you will, almost certainly, never learn all there is to know about either subject. Together they represent a pair of enduring, unquenchable quests. One can't ask for more than that.I am lucky to have exceptional clients with whom to practice my marketing concepts and strategies, and feel fortunate to have them appear pleased to compensate me appropriately.I am open for business and comments, both positive and negative, five days a week and occasionally on weekends, at bo@robertsstrategies.com and my blogs chronicled on my website, robertsstrategies.com. 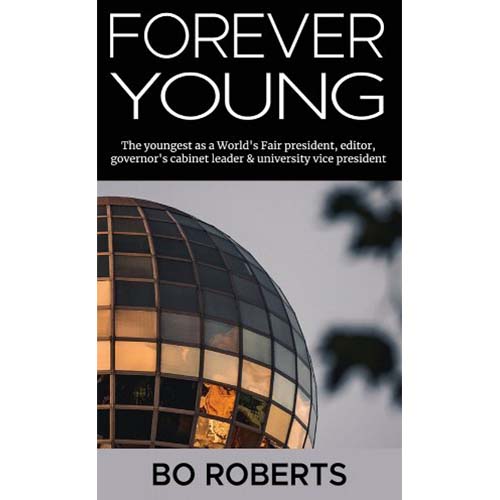