ROAD TO THE GALLIANO CLUB

RUTH CROSS: After escaping a dead-end Pennsylvania coal mining town, Ruth fulfils her dreams of dancing on Broadway, but is tripped up by a ruined reputation and prison time. Opening a dancing school above the Galliano Club is key to reinventing her life, but can the club be the sanctuary she needs?

LUCA LOMBARDO: From a bitter upbringing in Italy to the heartbreaking death of his wife and child in a New York City tenement, Luca loses everything he's ever cared about. The Galliano Club is the one exception. It's the home he never had. Nothing and no one is going to take it away.

BENNY ROTOLO: A member of Chicago's violent North Side gang, Benny learns how to succeed in the crime business until the day he's chased out of town by Al Capone. Determined to build his own bootlegging empire, he wants to seize the Galliano Club and turn it into the finest speakeasy north of Manhattan.
The blue-collar Galliano Club is the mainstay of Italian immigrants in Lido, New York. After long days building America's skyscrapers, ships, and electrical grid, thirsty mill workers head there to play cards, argue over the news, and drink the beer hidden in the cellar.

It's a comfortable place where no one is ready for the coming storm of murder, blackmail, and revenge.

Bursting with authentic details, the Galliano Club series was inspired by author Carmen Amato's grandfather who was a deputy sheriff of Oneida County, New York, during Prohibition. Crime always took center stage in his tales of immigrant rivalries, bootlegger ingenuity, and old scores being settled.

America's growing pains during the early 20th century provide a vibrant backdrop for the series. New immigrants file through Ellis Island as George M. Cohan lights up Broadway, Sacco and Vanzetti go on trial, women swoon over Rudolph Valentino's The Sheik, Chicago gangsters shoot to kill, skyscrapers sprout from cement and sweat, and the first flight over the North Pole is celebrated around the world.

Carmen Amato is the author of the Detective Emilia Cruz police series set in Acapulco, the Galliano Club historical thrillers, and standalone novels of suspense. A 30-year veteran of the Central Intelligence Agency, her personal experiences are occasionally disguised as fiction. A recipient of both the National Intelligence Award and the Career Intelligence Medal, Carmen has been a judge for the BookLife Prize and Killer Nashville's Claymore Award. Her nonfiction has appeared in Criminal Element, The Rap Sheet, Publishers Weekly, Mamiverse, and other national-level publications. 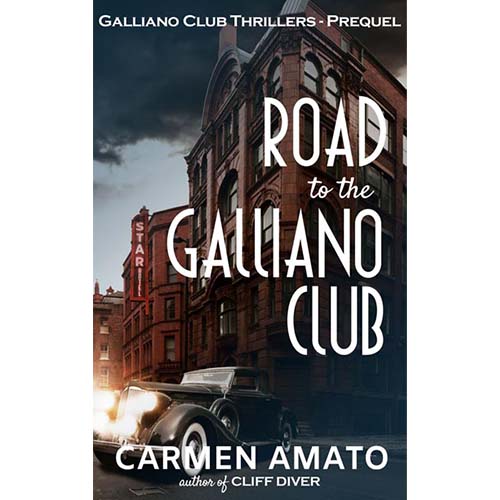