"Black Hands, White House" documents and appraises the role enslaved women and men played in building the US, both its physical and its fiscal infrastructure. The book highlights the material commodities produced by enslaved communities during the Transatlantic Slave Trade. These commodities--namely tobacco, rice, sugar, and cotton, among others--enriched European and US economies; contributed to the material and monetary wealth of the nation's founding fathers, other early European immigrants, and their descendants; and bolstered the wealth of present-day companies founded during the American slave era. Critical to this study are also examples of enslaved laborers' role in building Thomas Jefferson's Monticello and George Washington's Mount Vernon. Subsequently, their labor also constructed the nation's capital city, Federal City (later renamed Washington, DC), its seats of governance--the White House and US Capitol--and other federal sites and memorials.

Given the enslaved community's contribution to the US, this work questions the absence of memorials on the National Mall that honor enslaved, Black-bodied people. Harrison argues that such monuments are necessary to redress the nation's historical disregard of Black people and America's role in their forced migration, violent subjugation, and free labor. The erection of monuments commissioned by the US government would publicly demonstrate the government's admission of the US's historical role in slavery and human-harm, and acknowledgment of the karmic debt owed to these first Black-bodied builders of America.

"Black Hands, White House" appeals to those interested in exploring how nation-building and selective memory, American patriotism and hypocrisy, racial superiority and mythmaking are embedded in US origins and monuments, as well as in other memorials throughout the transatlantic European world. Such a study is necessary, as it adds significantly to the burgeoning and in-depth conversation on racial disparity, race relations, history-making, reparations, and monument erection and removal.

Renee K. Harrison is an associate professor of African American and US religious history at Howard University. She joined the School of Divinity faculty in the fall of 2010. She is the author of "Enslaved Women and the Art of Resistance" in Antebellum America and coauthor, with Jennie Knight, of "Engaged Teaching in Theology and Religion". 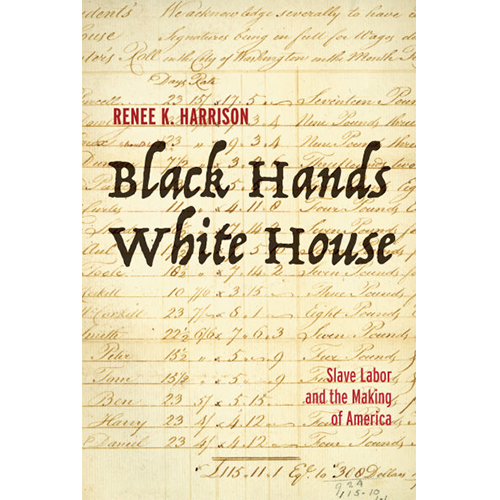