FAITH IN POLITICS: SOUTHERN POLITICAL BATTLES PAST AND PRESENT

Roy Herron graduated with highest honors from the University of Tennessee at Martin, then studied New Testament and Ethics in Scotland before earning Divinity and Law degrees from Vanderbilt University. But he came home to West Tennessee and served the Volunteer State in both the Tennessee House and Senate. For four decades, Herron served as a legislator, attorney, teacher, and Methodist minister. In that work, he published op-ed essays and articles in Tennessee's leading newspapers and publications from The Japan Times to The Wall Street Journal on various topics including constitutional liberties, economic justice, health care, politics, and more.

This informative volume collects the most powerful of these writings, adding helpful updates and contemporary insights. With an engaging, conversational style, Herron addresses voter ID laws, drunk-driving statutes, women's rights and many recurring, contemporary issues. Whether describing the challenges facing his elderly mother as she attempted to exercise her right to vote, or the struggles of working women and men facing illnesses without health insurance, Herron demonstrates an earnestness and thoughtfulness all too rare in politics.

These nearly fifty essays and articles provide evidence that Herron's Democratic Party and Christianity are not mutually exclusive. Indeed, Herron describes how faith brought him to politics and to fighting for justice, jobs, and constitutional freedoms for all citizens. Faith at Work is a veritable guidebook on how faith and spirituality should affect decision making and advocacy in public life.

Roy Herron was a Tennessee state representative from 1987-1997 and State Senator from 1997-2013. He wrote Things Held Dear: Soul Stories for my Son and God and Politics: How Can a Christian Be in Politics? He coauthored, with L.H. "Cotton" Ivy, Tennessee Political Humor: Some of These Jokes You Voted For. He lawyers and writes in West Tennessee and Nashville. 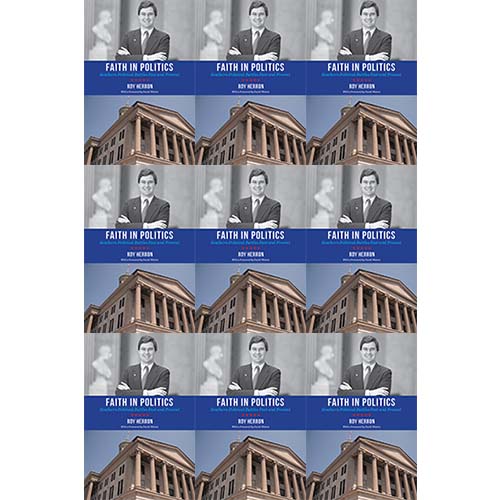