COVERED IN COLOR: CHRISTO AND JEANNE-CLAUDE'S FABRICS OF FREEDOM

Christo (1935-2020) and Jeanne-Claude (1935-2009) are renowned for their large-scale, ambitious art installations that wrapped landmarks and swaths of land in fabric, including Berlin's Wrapped Reichstag, Paris's The Pont Neuf Wrapped, and concluding with New York City's The Gates in Central Park (2005).

This lively biography chronicles Christo's humble childhood in Soviet-controlled Bulgaria-under a regime that suppressed individuality and creativity-to his international fame as a bold (and controversial) innovator in the art world. Christo discovered an early love of art and found a way to make a living out of his passion by wrapping bottles, cans, stacks of magazines, and even an air conditioner. When he met his wife, Jeanne-Claude, they moved to New York City as undocumented immigrants and became equal partners in both life and work-he, the artist, and she, the dealmaker.

Together, Christo and Jeanne-Claude made elaborate, visually stunning installations that transformed public spaces around the world, all free to the public. Christo never explained why he felt compelled to wrap things in fabric-rather, his work celebrated individual interpretation and the simple joy of seeing something familiar in a new way. And though each work was temporary, their awe-inspiring designs, uniting nature with the manmade, stayed with viewers long afterward. Covered in Color inspires readers to appreciate the beauty around us, however fleeting, and to push the boundaries of "possible."

Susanna Chapman is an illustrator, muralist, and designer. Her books include "Elizabeth Warren's Big, Bold Plans" , written by Laurie Ann Thompson. She lives in Nashville. 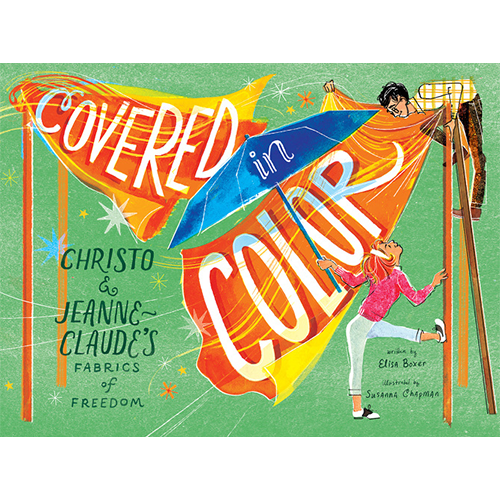