Was Nashville once home to a giant race of humans?

No, but in 1845, you could have paid a quarter to see the remains of one who allegedly lived here before The Flood. That summer, Middle Tennessee well diggers had unearthed the skeleton of an American mastodon. Before it went on display, it was modified and augmented with wooden "bones" to make it look more like a human being and passed off as an antediluvian giant. Then, like so many Nashvillians, after a little success here, it went on tour and disappeared from history.

But this fake history of a race of Pre-Nashville Giants isn't the only bad history of what, and who, was here before Nashville. Sources written for schoolchildren and the public lead us to believe that the first Euro-Americans arrived in Nashville to find a pristine landscape inhabited only by the buffalo and boundless nature, entirely untouched by human hands. Instead, the roots of our city extend some 14,000 years before Illinois lieutenant-governor-turned-fur-trader Timothy Demonbreun set foot at Sulphur Dell.

During the period between about AD 1000 and 1425, a thriving Native American culture known to archaeologists as the Middle Cumberland Mississippian lived along the Cumberland River and its tributaries in today's Davidson County. Earthen mounds built to hold the houses or burials of the upper class overlooked both banks of the Cumberland near what is now downtown Nashville. Surrounding densely packed village areas including family homes, cemeteries, and public spaces stretched for several miles through Shelby Bottoms, and the McFerrin Park, Bicentennial Mall, and Germantown neighborhoods. Other villages were scattered across the Nashville landscape, including in the modern neighborhoods of Richland, Sylvan Park, Lipscomb, Duncan Wood, Centennial Park, Belle Meade, White Bridge, and Cherokee Park.

This book is the first public-facing effort by legitimate archaeologists to articulate the history of what happened here before Nashville happened.

Tanya M. Peres is a professor of anthropology at Florida State University. She is the co-editor of The Cumberland River Archaic of Middle Tennessee and Baking, Bourbon, and Black Drink: Foodways Archaeology in the Southeastern United States. 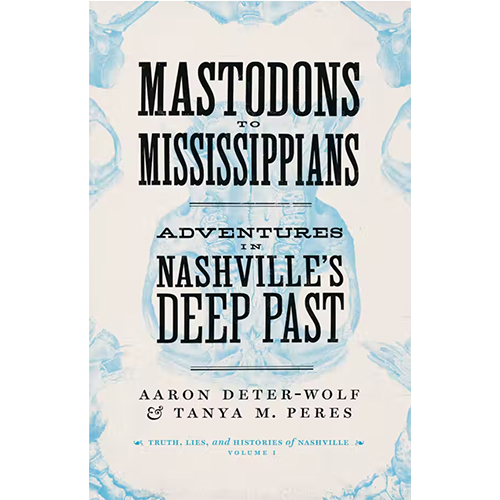